The Kings
Edward II 1307
Edward III 1327
Richard II 1377
Henry IV 1399
In the fourteenth century garments were fitted closer to the body than in the previous century. By 1310 there is evidence of a tight “sheath” type garment for both sexes. Belts were worn low on the hips, sleeves were fanciful and shoes long and pointed. A full circle cloak was the most common outer garment. 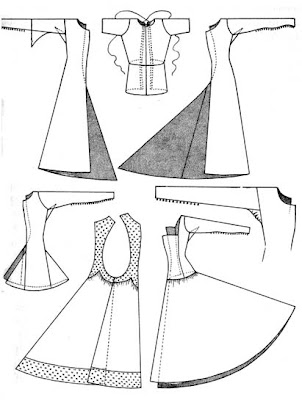 Mens (top) and womens (bottom) clothing from the fourteenth century.

It is a quirk of history that we have examples of fourteenth century embroidery but very little documentary evidence to indicate how it was designed and produced. In contrast we have documentary evidence from the royal courts, but very few embroidered examples.
By the beginning of the fourteenth century the royal household had its own workshop and demanded quality work in a short space of time. Documents show that in 1330 three counterpanes were embroidered for the churching ceremony of Queen Phillipa (cleansing ceremony after childbirth). 112 men and women along with 2 artists worked to complete the commission.

The Leopards of England
Work in couched gold thread are a fragment believed to have come from a horse cover made for Edward III. c. 1330-1340

Heraldic patterns were often embroidered on the costumes of the wealthy and these carried their own symbolism. Heraldic patterns are clearly seen on the depictions of the robes of Richard II and Queen Anne. 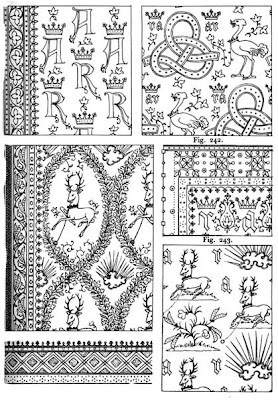 By the C13th church vestments had become a lucrative industry and workshops of male embroiderers produced vestments and also items for foreign orders, domestic use and for the wealthy. 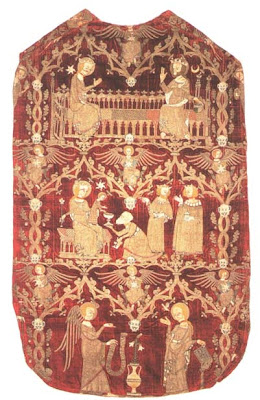 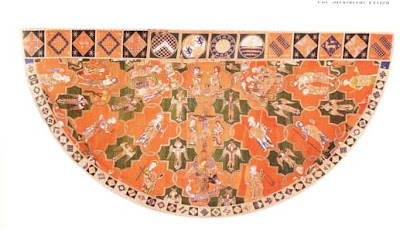 Medieval secular embroidery was widely produced and worn. Examples are few as these garments and hangings were worn, altered, taken apart and remade. Banners were made and used for tournaments and ceremonial occasions. Much of the evidence for these embroideries comes from paintings and illuminated manuscripts. Household bookkeeping also details furnishings, clothes and costs. 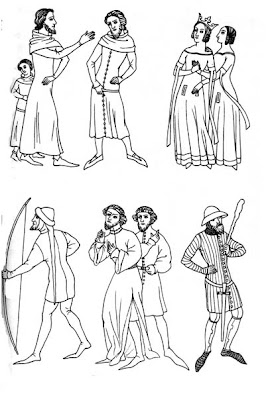 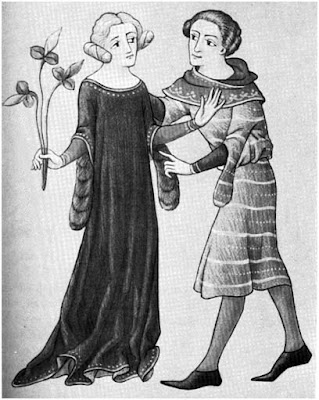 By the end of the early medieval period embroidery had already taken a position of high status, being held in higher esteem than painting or illumination, both of which were influenced by embroidery. (A period in time when needlework was regarded as a true art and respected more than fine art). It was a favourite pursuit of Anglo-Norman ladies as well as being worked on a professional basis in workshops and church institutions.
Between 1350 and 1450 English embroiderers produced superbly embroidered garments using various silk and gold threads. The work was known as opus anglicanum (Englishwork) and some regard it as the finest period of English embroidery. The embroideries were exported throughout Europe. Silk threads were used for colouring and shading and for couching the gold thread.
When couching the silk threads were used to great effect to form diagonal or “brick stitch” patterns. Various coloured silks were used strikingly to form pictures over the gold threads known as Or nue (shaded gold). Gaps are left between the silk to allow the gold to shine through. Or nue creates the most wonderful pictorial scenes but is very painstaking work.
A technique known as underside couching was commonly used at this time (though it declined in the fifteenth century). To work underside couching the material must be under tension (i.e. stretched on a frame) and a loop of linen thread was used to couch but it was pulled to the back of the work – taking a small loop of gold thread with it. This entirely concealed the linen thread and made the fabric very flexible.
Embroideries were often embellished with pearls, precious gems, gold and silver as well as enamelled plaques. These transformed the garments into powerful symbols of status and wealth and were seen widely in church and royal garments. The extreme value of these garments often lead to their destruction. As the garments wore out or went out of fashion the gold thread and embellishments were removed and recycled onto new clothes.
Opus anglicanum work was technically exceptionally and used only the highest quality materials. Fine artists drew the designs, possibly manuscript artists. Designs were mostly drawn directly onto the cloth, which would be stretched on a frame. The introduction of velvet later in the century posed a problem for embroidery and in this case embroidery was often worked on another cloth and appliquéd into place on the velvet.
The overall designs included circles and geometric patterns all containing figures and scenes. The finest surviving examples were made in London between 1275 and 1335 BC.
It is thought that embroiderers formed a Guild during the fourteenth century, though a charter was not granted until 1561. There was a high standard of workmanship attained with strict controls and long apprenticeships of eight years. At this time more men were involved in the profession and it is possible that London had family dynasties handing down skills through the family as well as to apprentices. Of course there would also have been smaller enterprises throughout the country and from surviving paperwork we know of several husband and wife businesses.
The concern for high standards of craftsmanship included the standard of gold thread used. The manufacture of this thread was a skilled occupation and earned higher wages than the embroiderers who used the thread. It was made by hand, by spinning narrow strips of gold or silver-gilt around a silk thread core.

Opus anglicanum declined following the Black Death in 1348 - which decimated the population, killing one third of the population and causing subsequent general unrest in the country. Techniques and materials changed; a greater use was made of imported material from Italy – brocades and velvets were used for the main body of copes and chasubles and needlework became limited to borders and applied pieces. Weaving now became more important than embroidery. The draughtsmanship was not as fine and cheaper and quicker methods of working were introduced. Stitches that were quicker to work became popular – satin, brick, long and short stitch, surface couching and stem instead of the tiny laborious split stitch.

During this century there is evidence for other forms of embroidery. Very few examples survive but we know from documentary evidence that appliqué was frequently employed. Outline and filling stitches include stem stitch (the most common), split and chain stitch. Counted thread work such as cross stitch and drawn work became more common towards the end of the century. Quilting had was used for creating protective doublets for wearing under armour where vertical, diagonal or cross hatching patterns were employed.

This century is a transition towards the Tudor costumes we all love. Dress became more structured and embroidery started to become less fashionable.

I have included a note on Textile Dyeing at this time and provided links to much more information and examples of the colours available. Take a look - its really fascinating just how they dyed cloth and how there were trade routes for exotic ingredients even in this century.

Henry VII 1485
The fifteenth century was mainly the era of the Plantagenet Kings. There was continued rivalry with the French who contested English claims on the French throne. 1455-1485 saw armed conflict within England (The “War of the Roses”) for the English crown.
In the fifteenth century the “modern” system of cutting and fitting was developed. The sleeves of a garment were specially cut and curved at the top. Women’s clothing developed to a separate bodice and skirt. Padding is introduced and men’s shoulders become padded and exaggerated. Long draping sleeves go out of fashion and pleats and gathers become more common. Men’s trousers develop a gusset and are no longer tied to a waist belt but to the inner jacket. 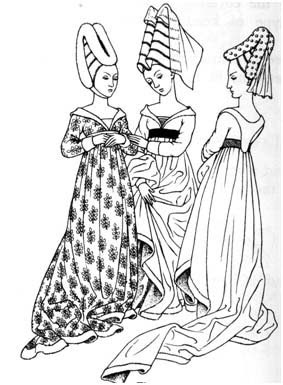 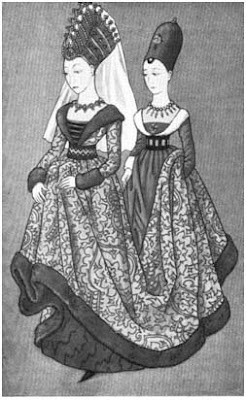 Towards the end of the fifteenth century both men and women’s costume changes. For men the white linen shirt (worn as an undergarment) is exposed at the neck and sleeves. The top garment is open from the neck to waist and the space is filled with a stomacher, which was often highly decorated. On occasion a long gown was worn with turned back lapels and slits for the arms. Shoes changed from being pointed to square toed. 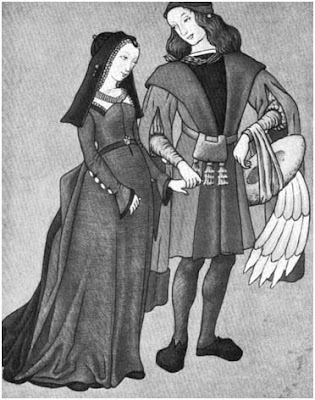 Women’s necklines became square cut and a stomacher was often worn in the front of the bodice. Skirts became less gathered and trains were buttoned to the bodice. 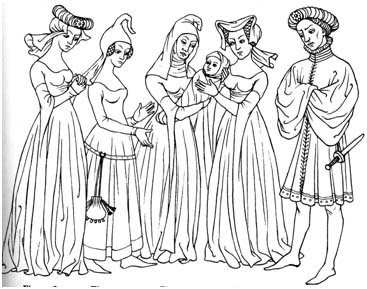 The Broderers’ Company was established in 1430 to protect the interests of the workshops over the lower standards of the self-employed.
Where dogs, deer and ships were seen in the embroidery of previous centuries in the fifteenth century pomegranates and artichokes became common. William Morris, designing in the Nineteenth century was highly influenced by fifteenth century design.
Heraldic tabards were popular and they were often made from silk and velvet laid onto linen. The motifs were embroidered with a combination of appliqué and stitch. 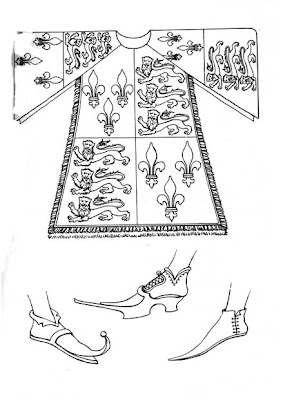 A note on medieval textile dyeing
This is just a quick note – see the links for lots of information on the web and examples of the colours dyers were able to produce in the medieval times. 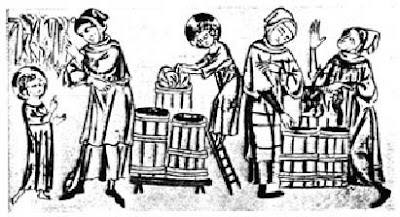 To understand the colours used in the embroideries the past, it is important to appreciate the dyes available to the practitioners of the time.
The extent and sophistication of the textile dyeing industry in Britain is difficult to assess at the time of the Norman Conquest and the century preceding. Following the collapse of the Roman Empire the textile and dyeing industries inevitably declined and institutions such as the Imperial Dye works at Winchester fell into disrepair.
Before the formation of the medieval guilds the dyeing industry was unregulated and unrecorded and so little information is available to us. Information can be gained from surviving costume and wall hangings.
Prior to the sixteenth century the dye stuffs in use would have been native to Europe. Indigo, brazilwood and turmeric were available from the East but were not in common use, except in Italy where a prolific dyeing trade was established. After the discovery of America and the opening of sea routes to India and the Far East tropical dyes were readily available and included logwood, annatto, brazilwood, indigo and cochineal.
The “Sumptuary Laws” were enacted a various times during the Middle Ages. In England they remained on the statue book from 1337 to 1604. The laws restricted the colour, materials and even the types of garments that classes of society were able to wear. The justification for these restrictions was to “reduce expenditure on unnecessary luxury and sinful pride” but really they were to differentiate the upper and lower classes.
Guilds for dyers would control the quality of the work produced. Lead seals were often used and were attached to lengths of cloth to indicate that the fabric had passed inspection. Seals were also used to indicate the type of dyeing used. Dyers were often forced to work outside the town or city boundaries, due to the unpleasant odours and the water population from the dyes.
Mordants are required to “fix” some dyes. Most mordants would have been extracts from rock alum, iron-rich mud and naturally occurring mineral deposits. When an alkali was needed stale urine or wood ash would be used. Acids were derived from rhubarb leaves, or acidic fruits.
LINKS
Example of the colours available here
Recipes for natural dyeing here 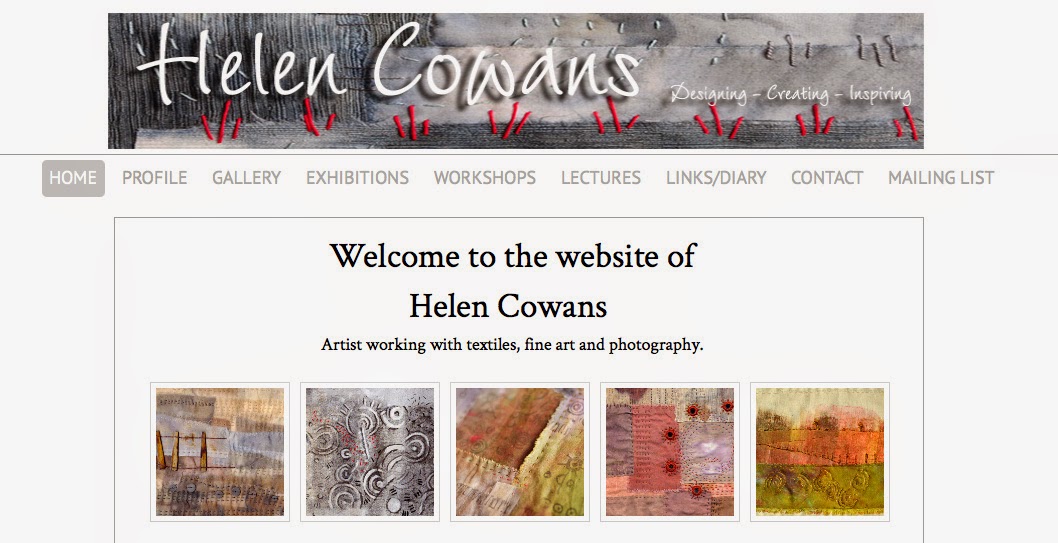 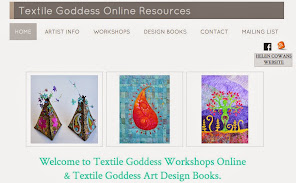 Land of the Far Horizons